Posted on 5 January 2013 by matthannan

I bet you were hoping that I had forgotten about this silly project and just moved back to Degree for Men, right? Nope! It is time for an update.

A couple of weeks back, I started running low on the deodorant in the refilled stick. That is until I really took the time to look things over. It seems that at the bottom of these sticks, there is a plastic spacer at the bottom of the stick that the center rod thingy extends through. I don’t have it in front of me, and this was weeks ago, so don’t expect me to draw you an entirely accurate picture. Anyway, this spacer is made up of a cross-hatch of plastic walls. Well, guess what I found filling these cells? That’s right, a whole bunch of trapped deodorant that would have been wasted. Like, maybe an ounce or so of it. I grabbed a small Mason jar and dropped the entire stick into it. Then I zapped it in the microwave for ten seconds. Repeatedly. About a dozen times. I didn’t want to melt the plastic, just the deodorant. Once the deodorant finally liquefied, I found that I had a fair amount of reclaimed natural deodorant in the bottom of the jar. I let the stick drip dry, then pitched it. Maybe I recycled it. I don’t think we can recycle those things here, though, which may have been an added bonus for what I did next. After tossing this jar full of liquid deodorant into the fridge for 20 minutes, I found that it solidified again just like it had previously. I made the decision right then and there that I was done with sticks and Rev 3 of the recipe (with bee’s wax) could suck it.

The next morning, I did something that I don’t think I have ever done before outside of the shower. I touched my underarm area with my fingers…while rubbing about a pea-size ball of the deodorant into the area. This struck me as really odd and obviously must be some sort of a cultural taboo. I had never touched my armpits in this way before? How is that even possible? I’ve done the fart noise thing with the palm of my hand. I’ve scratched my pits before when they itched, but this was usually (always?!?!) through my clothes. And, like I said, I’ve washed them. But there was something kind of weird to me about what I was now doing. It didn’t seem like some sort of a deviant sexual thing, which is good. But it definitely seemed to me that I was doing something outside the bounds of normally accepted behavior. But why? I still don’t know, but now I am over it. The stick is a fairly recent invention, after all.

Anyway, I am pleased to report that since I made that first batch on November 17, I am about to head to the kitchen to mix up my second batch. Today is January 5 and I still have maybe two or three days worth of deodorant left in my little Mason jar. I have not at all in that space of time ever smelled as bad as I would sometimes get while using commercial deodorant. While I did experience a couple minutes of underarm irritation once or twice, this could have been for any of a number of reasons. I have not had any of the kind of irritation that I was experiencing, daily, with commercial deodorant. As for the cost, I can now see that this is going to quickly start being cheaper than using commercial deodorant. With that, I was needing a new stick about every three weeks, or so it seemed. I swear, they are reducing the amount of deodorant inside these same old sized plastic sticks. It just doesn’t make sense that I suddenly found myself burning through deodorant at such a rate.

Conspiracy theories aside, I just made my second batch. This is a full 4oz Mason jar. I used a slightly different recipe, but I am mostly pleased with the results and very happy with the yield. Jenny tells me that what I really liked about the consistency of the first batch was the shea butter, which this second batch does not have. So, in a couple months when I finally run out of this insane amount of deodorant, I will probably go back to the first recipe. 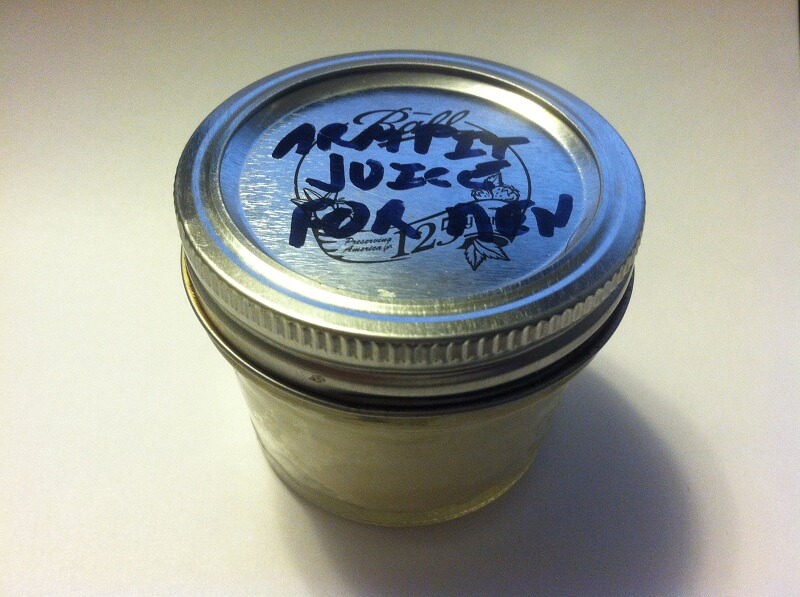 Yes, you read that right

This entry was posted in Life and tagged deodorant, Jenny, myrrh, projects. Bookmark the permalink.

This site uses Akismet to reduce spam. Learn how your comment data is processed.

Bad Behavior has blocked 117 access attempts in the last 7 days.